08 box 8100 Blk of Finch Ct.*
Engine company 37 was alerted for the reported house on fire. First arriving units found a 2 story split foyer home with fire showing from the attached garage with the fire spreading to the home. The engine arrived and stretched a line to the attached garage. While crews were making entry to the home there was a partial collapse of the roof. A may day was called and the involved crews were quickly removed. Crew members for Company 33 sustained injuries, that were non life threating. Crews were evacuated from the house for an accountability check, once completed the crew from 37 finished extinguishing the attached garage. The engine company operated for 3 hours before returning to service. This was the third fire in 4 days for company 37. membership@ritchie37.com Photo credits: @pgfdengine_company5 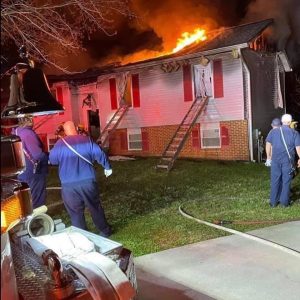