Just after 2230 hrs the engine company was alerted for the house on fire in Company 46’s first due. Engine 371 w/6 was dispatched as the 3rd due engine and arrived as such. First arriving units went on scene with a 2 story single family with fire from the roof. The engine company stretched a line and was assigned to the second division. Working with the truck, the engine knocked down the fire in the attic of the home. Earlier this week, a box alarm was dispatched to this same address for a small fire on the C side of the home. The engine company operated for nearly 2 hours before returning to service. 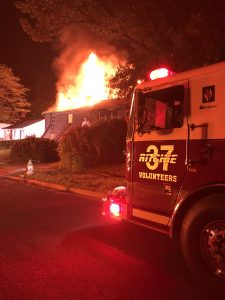 Units on scene with fire showing from the second floor. ... See MoreSee Less