The Ritchie Volunteer Fire Department was officially incorporated in the state of Maryland on October 5, 1964. They were endorsed by the Prince George’s County Firemen’s Association, strongly supported by the community, and backed by local businessman. On November 25, 1964 Mr. Alton P. Nicholson donated a parcel of ground to the Ritchie Volunteer Fire Department in the area known as the Ritchie Triangle. Not long after, on December 12, 1964 Mr. and Mrs. Aubrey Ritchie donated another parcel of ground to the firehouse. The two pieces of land together made the present building site from there it became a real trial for the membership of Ritchie to get our firehouse built. The membership came across various hurdles on the road to actually serving the community. Three years after the establishment of the Ritchie Volunteer Fire Department a three bay engine house was finally constructed.The department purchased a 1951 Seagrave pumper from Silver Spring Maryland for 3500.00 dollars and a 1953 Federal pumper from surplus property for 300.00 dollars. The first ambulance was a Cadillac which was donated by the Boulevard Heights Volunteer Fire Department. That met an untimely fate as it caught fire on approach to Prince George’s Hospital.

In order to replace the first ambulance the membership raised 500.00 dollars to purchase a GMC ambulance from the Capital Heights Volunteer Fire Department. 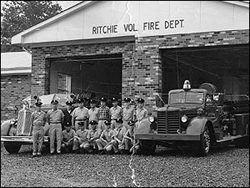 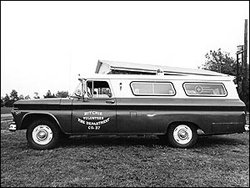 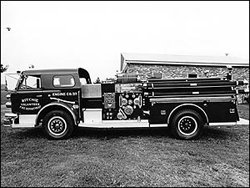 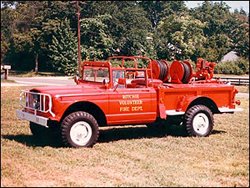 In 1968 the department purchased two used American la France pumpers from Elmira New York. One being 1959 and the other 1961 for a total of 35000.00 dollars. In 1975 the Ritchie Volunteer Fire Department went into the brush truck business. With the assistance of then senator Fred Wyneland the department purchased a 1967 army jeep for 10.00 dollars from the civil defense department at Aberdeen Proving Grounds. From those 10.00 dollars the department built our very first and to this dates our only BX unit which was affectionately known as “The Beast”. The GMC ambulance was then replaced by a 1968 Chevy Suburban which the company paid 5000.00 dollars to have converted into an ambulance. In 1978 the station acquired a county ambulance to replace the suburban right along with its white paint scheme and orange stripe.

Then in 1981 Prince George’s Fire Chief Jim Estepp instituted the rescue unit pilot program, but with the program came staffing problems. The four career personnel stationed at departments with an engine and ambulance became three in order to staff the rescue units for the pilot program. To protest the man power issue in the station the career Sgt. at 37 decided to place the ambulance out of service during the hours of 0700-1500, because staffing the ambulance only left one career firefighter in the station to get the engine out. The only circumstances that would cause the ambulance to go back in service if the volunteers were there to staff it.

In 1993 Mini- Pumper 37 went into service on a 1992 Ford Super Duty Chassis with a Marion body. The Mini-Pumper helped take the call load off of the pumpers by handling various medical calls and small fires, which allowed the pumpers to stay in service.

The department was growing in size as well as the call volume. The officers and members saw the need to expand the living quarters and engine room space. In 1991 after obtaining land to the west of the station, ground was broke for the new addition. The department went from a three bay engine house to a six bay firehouse with two being drive through bays for future expansion of our fleet as well as a second floor used for meetings and large dinners. Finally in 1994 the addition was complete, the “Southside Taj Mahal” stood tall, and the Ritchie Volunteer Fire Department became a shinning example of what a modern firehouse is meant to be.

The latest addition to the Ritchie Apparatus fleet is a 2001 10 man tilt cab seagrave wagon Engine 371 the “VOLUNTEER EXPRESS”. Engine 371 is the fourth Seagrave owned by the department. 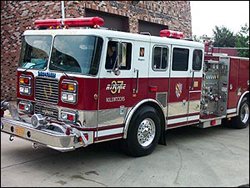 On August 2nd 2002, after a 24-hour notice Prince George’s County Fire Department removed all paid staffing from station 37, and left the Volunteers to change our schedules with our jobs and families, to ensure that the engines continue to provide service to the community no matter what time of day.

On January 1,2010 The Ritchie Volunteer Fire Department started to provide a new service. The company placed in service it first ever Truck Company. The truck is a 1996 Spartan/Quality that is owned by Prince George’s County Fire Department.

The Ritchie Volunteers operate two pumpers, Ladder truck and a Mini-pumper. The membership is comprised of many different faces of all ages and strives for nothing but he best.